Rise with the Sun 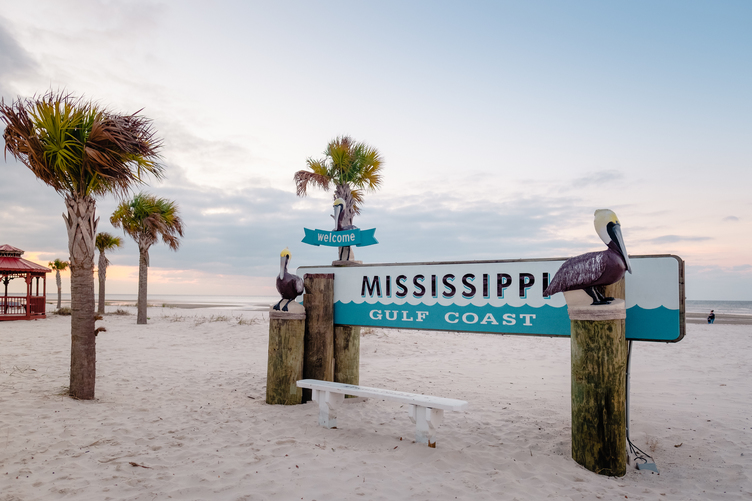 Set your alarm and head for Pass Christian Harbor at dawn. Watch the sunrise over this breathtaking natural estuary—flush with sea life and birds, including bald eagles, red-winged blackbirds and herons—as the shrimp boats head in. It’s a wild view, almost like watching a nature show in person. Afterward, stop into Pass Christian Books, where the upstairs “Mississippi Loft” is dedicated to books and authors representing the state’s proud literary tradition—perfect for reading on a wide porch while sipping a cocktail and listening to bird song. Which you definitely should.

Shrimp, fish, oysters, oh my! Seafood is not just an important Gulf Coast industry, it’s at the heart of the region’s culture. Biloxi’s Maritime and Seafood Industry Museum delves into that rich history with exhibits on everything from wooden ship building to net-making to maritime art. For a thrill straight out of the 1800s, set sail on one of the museum’s two “White Winged Queens”—gorgeous 65-foot replica Biloxi oyster schooners. Just down the road, perched on stilts above the Biloxi Small Craft Harbor, locals recommend McElroy’s Harbor House, a low-key seafood spot where you can listen to the gulls as you sip a local brew, the Biloxi Beach Blonde, and eat fried Blue Crab claws or fresh-shucked oysters on the half.

If watching the boats is making you want to get out on the water, hop aboard a Ship Island Excursionsferry to West Ship Island, a pristine strip of sand ten miles offshore that͛s part of the Gulf Island National Seashore. Spend the day on immaculate beaches, hunting for seashells, flying kites, or splashing in the Gulf. Beach chairs and umbrellas are offered for rent, so all you need is cooler for ice-cold beer and your favorite inflatable floatie. If you're looking for a bit more adventure, locals will point you to the Gulf Coast Gator Ranch, a 105-acre wetlands near Grand Bay Estuary in Moss Point-Pascagoula, where you can spot alligators and rub shoulders with other adrenaline junkies as you race through swamps on a high-speed airboat.

In downtown Gulfport—between 26th & 27th Avenue and 13th & 14th Street—there’s a colorful little cobblestone alley painted in bright murals and strung with lights. Artists from far and wide have made their mark on the tiny street’s walls, panels, and shutters. The result is Fishbone Alley, an outdoor art gallery with a motto and a mandate: Make It Funky. Head to Murky Waters Blues & BBQ for live music or to grab a cocktail in a “to-go cup”—yes, it’s legal—and enjoy an adult beverage with the alley’s artsy atmosphere.

From spring to early summer, the whole Gulf Coast has crawfish fever and locals won’t hesitate to share where, and how, to eat them. How? “Pinch the tail and suck the head!” For spot-on Southern fare year-round, head to the Filling Station. (No false advertising here, the oldest building in Flowood, Mississippi is, in fact, a former gas station.) Try the fresh Mississippi catfish—fried or blackened—or the breadless crab cakes, a house speciality and point of pride. In Gulfport, locals rave about Chimney’s for a decadent Sunday brunch of rich Gulf shrimp and grits with an obligatory glass of champagne and a beachside view under the mossy oak trees. If it’s Gulf Coast oysters you crave, try them with a side of “New Orleans flare” at The Half Shell—a small regional chain beloved for its grilled oysters. They come charbroiled, Bienville, Rockefeller, and Orleans-style. Order the sampler and get three of each. Just line ‘em up and slurp ‘em down.

One of the cutest, quaintest seaside towns you’d ever hope to meet, locals love Ocean Springs. Settled by French Explorers in 1699, this small, subtropical city is overflowing with independent galleries, shops, restaurants, and Gulf Coast character. Its most famous resident, Walter Anderson, is a celebrated nature artist who was an important player in the mid-century Arts and Crafts movement. A museum dedicated to his iconic flora and fauna-inspired block prints, watercolors, and ceramics reveals Anderson’s romance with his adopted home. For coffee and biscuits with a side of music, art, community-building, lectures, bonfires, and beer, stop into The Greenhouse—a literal greenhouse that was transformed and reopened as a coffeehouse and community space in 2014. Their annual Biscuit Tournament is a savory vs. sweet competition for the ages.